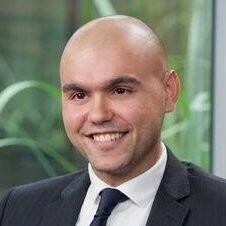 Alessio is an Italian qualified avvocato and a cartel case handler at the Directorate General for Competition of the European Commission. He has close to 15 years experience in both contentious and transactional antitrust matters at top international law firms Latham & Watkins and O'Melveny & Myers, ultimately as a counsel, and as an in-house associate general counsel for antitrust at Facebook. While in private practice he was selected as a "Future Leader" in competition law by Global Competition Review's Who's Who Legal in 2018 and 2019.

Previously he was an academic assistant in the Legal Studies Department of the College of Europe, responsible for the specialization in European Law and Economic Analysis (ELEA), where he worked with Richard Whish, Giorgio Motta and Mario Siragusa, among others. He graduated with a BSc and MSc in law from Bocconi University, Milan, and obtained an LL.M. from the College of Europe, Bruges (European Law and Economic Analysis specialization), where he was awarded a Rafael Sanz Rodriguez memorial prize for the best thesis in the Legal Studies Department.