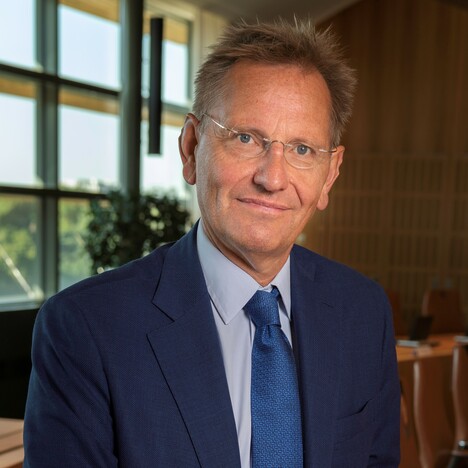 Born 1960 in Gorredijk (Netherlands), Marc van der Woude completed his first years of study at Rijksuniversiteit Groningen (University of Groningen, Netherlands), where he obtained a law degree in 1983. He continued his studies at the College of Europe (Belgium) until 1984.
Following his studies, he was very actively involved in teaching and research at the College of Europe, where he was an assistant lecturer until 1986. He went on to become a lecturer at Universiteit Leiden (Leiden University, Netherlands) from 1986 to 1987. Throughout his career, he has remained in education and was awarded the chair of Professor of Law at Erasmus Universiteit Rotterdam (Erasmus University Rotterdam, Netherlands) from 2000. An author of numerous publications, he has contributed to the development of competition law, as evidenced by several reference works on the subject.
Alongside his university commitments, Mr van der Woude practised law. From 1987 to 1989, he worked for the Commission of the European Communities, where he was a rapporteur in the Directorate-General for Competition. He then joined the Court of Justice of the European Communities and worked as a legal secretary to the judges Thymen Koopmans and Paul Joan George Kapteyn from 1989 to 1992. The European Commission appointed him as an administrator in the Coordination Unit of the Directorate-General for Competition, a post which he held from 1992 to 1993 before becoming a member of the Commission's legal service from 1993 to 1995. From 1995, he became a member of the Brussels Bar (Belgium), where his litigation work focused on competition law.
Mr van der Woude was appointed as a Judge at the General Court on 13 September 2010. His peers elected him as President of the Chamber on 18 September 2013 and as Vice-President on 20 September 2016. On 27 September 2019, he was elected as President of the General Court and has served in that capacity since then.